Whitlock:Yeah, and i uh appreciate you answering the questions i had about Genius, an an, i don't wanna try your patience but, there some questions i been wanting to ask you about tech. So how do you react to people uh that say you, Kutt, Scoob, that cha'll working alongside a devil worshipper. What about the Strange Music symbol being a snake and bat, you know, some people say the "s" and the "m" stands for, Sato-machism, an an the barcode cross that means the evil is god, how do you explain that.

Krizz: i mean man i questioned him using the snake which is a serpent like the devil and a bat which is a creature of the night you know what i'm saying and even a cross but its Tech man, he crazy, we just let him do what he do man

Krizz: i mean it jus means Nutthouze, its..

Whitlock: how do those number means Nutthouze

Krizz: You gotta look on the phonnnee, N-N-U-T-T-H-O-U-Z-E, it just means Nuthouse and i think people try to make this thing into more than it is man.

Whitlock: you know some people say he's trying to say six is evil, seven is godly, you know anghelic the name of his album originally, saying thats good and bad, and he might've been saying evil is god the whole time, are you missin this?

Krizz: This just Tech provokin ya'll man and ya'll fall for it.

Whitlock: Ok. You're music is really startin to spread, all across the world.

Whitlock: You know, you make the pay dues acceptable, rock the bells with N.A.Z. and Damien Marley. You're tourin overseas, it seems there's no limit to the success you guys are having, an an you're in the middle of a recession having this kind of success an an..

Krizz: I mean there's lots of businesses achievin right now dude, we are..

Whitlock: Just write this off as Tech N9NE, and he's so super talented, you know you might need to look deeper Krizz man, who what are you followin..

Krizz: Ay man i gotta go dude this is too much for me 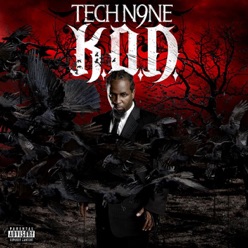