[Narrator] Somewhere deep in the slow, eternal dance of the heavens drifts a planet called simply "Earth"
And among the otherwise unremarkable population of this planet are two incredible heroes, destined to save the future from itself!

Part II: A Rainbow Of Time

Soaring through the galaxy, the stars and sky align
The speed of light's for pussies; we're going at the speed of Brian
Flying towards the sexual peak of history and time
Computer, set a sexy course for the sexiest year

Crossing through into a fuckin' worm hole beyond the Milky Way
That shit's far
To a time on Earth so far into the future where everyone gets laid
Twice as hard
We're noble knights of honor on a fierce and sultry butt crusade
Here we are!

Wait, this place isn't sexy at all!
And this robot sign says human touch has been outlawed

I can't believe my eyes, but it's a world without sex
Everyone here just wears full length pants and loose fitting turtlenecks
Men and women wave to each other from a respectable distance
Without the thrill of boning, what is life?
We must speak to the Council of Dick Elders tonight

[Dan] Excuse me, Dick Elders?
[Dick Elder Michael Starr] What do you want?
[Dan] I know it's most unusual to come before you so
But the planet Earth sucks balls now that no one's allowed to bone
We've come from the past to introduce you to ass
[Dick Elder] Wait! You're Ninja Sex Party! You will ruin our plans!
Guards! Sound the alarms!
If people have sex, they’ll break our thousand-year spell
There will be a revolution, and they'll think for themselves
We control this planet of unsatisfied wood
Why does being evil always feel so damn good?

[Dan] Fuck that bullshit, we'll make it right
Get ready for a sexy fight
My dick's the spark of hope and a revolution shall ignite (tonight)
We're taking flight, we have to find a girl
[Dick Elder] Shoot the fucking lasers!
Shoot the fucking lasers at 'em!
[Dan] Show her what it means to love, and fix this broken world
[Dick Elder] All the fuckin lasers!
All the fuckin lasers at 'em!
[Dan] A new sex king will rule; let the boner banners be unfurled

[Dan] Ninja Brian, look at that girl with the sad eyes and the beautiful blonde hair. I'm immediately in love!

Part IV: Grand Reckoning At The Castle Of Infinity

I can't believe my eyes, but you're the girl of my dreams
Let's both tear all of our clothes off like two pants-hating wolverines
The love we make will save the Earth from this oppressive dick regime

But what about the Elders?
We tore their world to shreds
Maybe they'll be cool with it
Oh hey, Dick Elders! How's it goin'?

[Dick Elder] It's over, Danny Sexbang! Your time has come!
But first, we're gonna take care of your ninja friend, here!
(Slash) Aaaaaaahhhhh!
[Dan] Goddamn, Brian, you killed them all
Now the empire will fall
I have to say in retrospect that was easier than I thought!

Our work here's done, the future is secure
But my girl and I have one last farewell slam just to be sure
For underneath those rockin' boobs lies a heart that is so pure
Take care of this world for me, my darling, I will always love you
...What is your name by the way? Kristen? Ah, a beautiful name
Until that glorious day when we meet again, Katie, farewell! 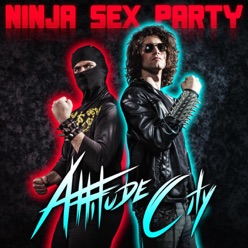