A Knock Upon The Door

"hell!" sang the young minstrel, "hang tightly to your purses!
Bitter winter on this blonde city and utter curses!"
The song ended and the onlookers did roar
Were i sincere, you bet i'd hear
A knock upon the door

"hell!" went the muse, intent, "you take me for granted!
You've made me a harlot, if i may be candid!"
The label dropped her, not before they shopped her in a bidding war
Were i sincere, you bet i'd hear
A knock upon the door

The tired minstrel, leaving town, heard the muse's weeping
He turned up the elvis tape in his grey car, creeping
"sex and death! was i not the breadth among the two?" she poured
"were you sincere, i bet you'd hear
My knock upon your door!"

He said, "dear muse, come here! need a lift somewhere?
You've got the wrong man, i was only kidding back there.
I worship you! forgive me for behaving like such a boor.
I am sincere: i hope to hear
Your knock upon my door!"

"the causeless cause of flawless flaws has video on you." she scorned.
"evidence, in none defense, should i have you burned, deformed.
Hey! hell is real and so will be your sores!
Heck with sincere, hark, i hear
A knock upon the door."

The derisive muse said, "your therapy isn't working, is it?"
Memphis huckster-hitler-hustler! aren't you a clear yet?
Always brooding the meaning of sex, pretending to be poor.
Klock is here! hark, i hear
A knock upon the door."

His head throbbed under her voice, ubiquitous and soft
Beads streamed from his hair, soaking his black t-shirt's cloth
Gut feeling was to leave her words on the cutting-room floor
He thought, "if i stay here, i'll never hear
That knock upon the door"

Muse, exhausted, peered the accosted, her hand on her abdomen
A human voice to her songs, she could not condemn
Because of a communion they had had of yore
The blessed day is near, soon they'll hear
A knock upon the door

A Knock Upon The Door de Cass McCombs 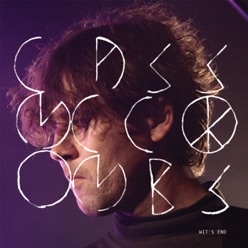