...And The Sky Turns To Black

...And the sky turns to black
The impious darkness vomited its unholy and
obscure cloak from the heights
Solitary souls covered by shadows
Men, women and children excruciated
by the agony of the domination
Lifeless god, skies in flames
Like an uncontrollable conflagration
making tremble the thrones
Enslaved bodies, faithless clergy
Controlled by corrupted creatures by delight,
slaves to their own creation

...And the sky turns to black
The innocent hope of any day having
their sins forgiven, now destroyed
Immaculate dreams are lost
Prophecies and beliefs break up
before the new reality

Everlasting graces no more
Only the perpetual disgrace reigning over the earth
Nightmares, now, are reality
Symbolizing the painful destiny with no return

A new age arises
Where chaos and disharmony reign
Desecration, tribulation
Only darkness is real

Ecstasy of souls
Inhuman, with no love in their hearts
Celebrating
The death of a lifeless god

Lead: Paulo Lisboa
"Repulsion of the gods, the sun no longer rises
No redemption, no salvation, no second chance to live
Cursed souls now regurgitate their own faith
And roam forever lost in the shadows of the endless abyss..."

...And The Sky Turns To Black de Headhunter D.C. 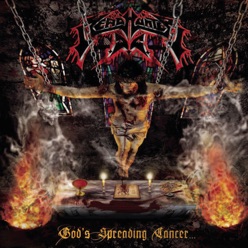 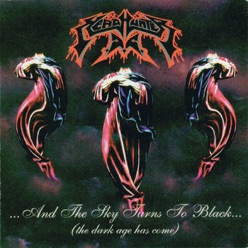 And the Sky Turns to Black
2000
Ver todos los discos