(Dre)
All you see is the sun
Reflecting off of the gun
Get ready for the showdown
It go down at one
Sweat on my brow
Let's settle it now
I'm a show you how real cowboys get down
I'm polishin gold, waitin' for this drama to unfold
I got a blunt rolled
Feelin' bold, Gangstas blood runs cold
It's time to reload this ol' 45 cold
The wind's rushin, it's hot muggy & dusty
I bust a couple a shots, make sure i'm not rusty
It's past noon, they should be here soon
Sip a lil moonshine, inside of some loom
All a sudden i could hear the sounds of hooves
It sounds like a thousand wolves
I cocked back, toastin the host that froze
I pose like a poster, it's closer than close
I hope the heat's dirty
I heard he fights dirty
But i'm a leave 30 inside him & leave early
And just when I went to feel him ??
I put the gun to his head, & this is what he said

(Eminem)
You never met, me
You'll prolly never see me again
But I know you, the name's Slim
You want revenge?
Then don't shoot, I'm in the same boots as you
I'm tellin the truth, I got a price on my head too

CHORUS:
Ya ride like a cowboy toward the sun
Life ain't fun when you're on the run
Got your gold & you got your gun
But life as a outlaw just begun
Got your shotgun by your side
Got your horse & you got your pride
Ya ride 'til there ain't no place to hide
It's sad 'cuz the bad guys always die

(Dre)
He was shady, you can see him by the look on his face
He said take 10 paces, shit, I took 8
Spun around & I aimed straight for the brain
My shit went bang, but it only fired a blank
He said (You need bullets, hurry up, run!)
I put a clip in the gun & pointed it at his arms
He pointed it & you at the same time & I stood stunned
(Go ahead, shoot me, but I'm not the one you want)
I figured he was tellin' the truth, that's why I didn't shoot
So what we gon' do, it's on you
Did you recall when you & Snoop was a group? (the Chronic)
Well all we gotta do is find the map to part 2
Plus I know who's got it (Who)
Some old dude, He's got 26 plaques & he's already sold 2
I loaded up my saddle, got ready for battle
Here are two pieces of gold inside of my statues
We rolled two miles until we hit the spot
An old ghost town that everybody forgot
A place where I used to smoke chronic a lot
Slim grabbed his shot gun

(Eminem)
Dre here's the plot
This is the spot
They call him Doc Loveless
He's goin' around sayin' he took the game from us
(Let's shoot him in his kneecaps, he'll never see it comin')
He ain't go no legs, they cut 'em off at the stomach
He's got mechanical legs, he spins webs
Plus he's more respected by the hip hop edge
My mission, is to get him to stop layin' eggs
& We could put him on his back down a fligh of steps
(I drew two guns & spun 'em on my fingers
Get the swingers doin it, startin' gun slingin
I could hear somebody singin'
Sounded like a g-thang & a verse from "keep they heads ringin"
I said it's Dre's day & started to spray
Instead a 18-hundred, he pulls an AK
All a chips started flyin' every which way

(Eminem)
That's when I saw Dre in trouble & game to the gage
I fired the first shot, He spun his body around
He hit the ground & landed upside down
Dre grabbed the map, the plaques & the gold
I grabbed two girlies & a blunt that's rolled 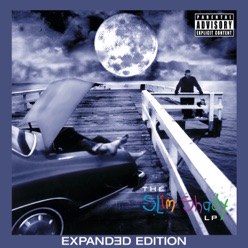