They'll send you to New Bedford town, that famous whaling port,
And hand you to some land-sharks there to board and fit you out.

They'll tell you of the clipper ships a-going in and out,
And say, you'll take five hundred sperm before you're six months out!

It's now we're out to sea, my boys, the wind comes on to blow,
One half the watch is sick on deck, the other half below.

And as for the provisions, we don't get half enough,
A little piece of stinkin' beef and a damn small bag of duff.

The skipper's on the quarterdeck a-squintin' at the sails,
When up aloft the lookout cries he sights a school of whales!

So clear away the boats, me boys, and after him we'll travel,
But if you get too near his flukes, he'll kick you to the devil!

When comes the stowing down, me boys, 't will take both night and day,
And you'll all have 50 cents apiece on the 190th lay!

And now we're homeward bound, me boys, and when we're through our sailin'
A winding glass around we'll pass and damn this blubber whaling! 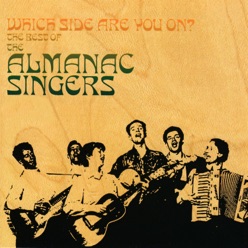 Which Side Are You On? The Best of the Almanac Singers
2006
Ver todos los discos