Trying to feel my inside soul, cause a angel told me its cold
But ain't no way I can fold, with a pair unless this damn swoll
Cause where a nigga was raised, don't nobody play games
Its like your life is the sweets, and reality's the flame
So why the fuck you trying to torture, with that dip in the middle
Its like I'm swallowing mighty bites, while you be nibbling on skittles
Cause this city we in, it ain't no such thing as friends
And once it comes down to paper, you down to bump off your kin
You think I'm lying, what thoughts be in my head as I walk around
So now you know when you see me, why my face is quick to chalk a frown
Cause I don't trust nobody, no not a god damn song
So now you know I'm a hog, from high to a deep level of cold
Thinking why niggas let me broke in this city of Houston
But ain't no stopping bam, I'ma keep my ego to boosting
Cause I got a bunch of fans that love me, and bitches that jock
I got killas in my click, and I keep thugs on my block

[Chorus 1 - 2x]
I'm just letting you know don't test me, I'm with the chrome
I'm still in my ghetto peel, I'm more than your average nigga
From that Mo, lookin out the house with a bed with a bullet in the way
That hit your spine, and now you crying, cause you realize
That your dick can't even get hard

[Trae]
Who the hell could it be, peeping on me
T to the R to the motherfucking A-E
Killas that like me trucks with a bust, better duck
Who the fuck running up, so nigga what, 'fore I leave my star full of that heat
Gotta watch my back, 'fore I be alone that shit is gon fall, and the while
Back me up, to the sides shaky grin, gotta know get enough for them
That T to the E to the E to the A
Its going down south, what you wanna do
Bitch throwing my set every, to your chest with a mess
Now stop you drop, like sweat it out my face
What killas want right behind me, (I think you lying), so try me
These head about niggas don't play
Cut in all my killas, till the day I'm dead and deceased
It'll be, these niggas out Houston won't ever fade
What I'm all about, hoping with open kicking eyes open, peeping
I gotta be scopeing, better keep wishing, G's on these streets be low
Till the point of my life I can't go, got hatred not cause a hoe
K-I double L-A-K-L-N to the B to the A to the M, gotta represent
Never know with a lifestyle, with a five dolla with a mile
Gotta get my life be twisting thoughts, a thought in the vault
You can't forget, and you feel the anger, with one in the chamber
Grill in the back, but its your, me task and the regular
My K, fives don't give a damn to hustle so
Can't change on my feet to the dip, trying to stop
Till the playa get a hit, to the drink to the brain, get me crunk
Get a boost, can't tougher shit, city of killas and it get loose

Fuck around and pull out my ak, and bust yo ass in the head
I'm trying to leave you dead, with an infrared
I never be giving a fuck aboooout, you
It got me going me crazy, got a nigga going crazy
Got me going crazy, crazy

[Verse 3]
Test the all mighty devil, specialized in the methods of torture
So stepping without a weapon's not a good idea, just thought I'd warn you
I'm not your average nigga, I'ma guerilla, just look at the frown on face
Running with the pack, ready to attack
Fucked up and get your whole crew erased
If you think I'm playing come test me
Better catch me slipping, to get the best of me
Deadly when me toss to the K to you
Focused and keep my aim steady, cause its serious
And I run with killas, dealas and guerillas coming to get you
Better make a move fast when I blast
With no feelings, with a firm grip on my trigga
Open fire with no hesitation, infiltrating, start eliminating
Your troops execution style, leaving em face down on the pavement
A career with them here, look em up and let's see who's the boss
Watch it get raw, coming home with three hitter quitters
That'll beat you up from the back gone, making niggas mine
Representing Guerilla Maab to the fullest, let me pull it
To the made a mistake, and try to give me a break
And didn't use it when you pull it, in the city of killas
Only the tough and the strong and those who have hearts survive
Guerilla Maab's on the rise, nigga

[Z-Ro]
Got my glock 44, and I think to myself
A murdering I'm gon grow
But I got the fever, for the favor of a big pocket
And a blue white, come with the look so sneaky
I weigh in at 175 pounds, ?then I'm gone in a few minutes?
Around when I come around in red Chucks
But a nigga can't even see me or hear me, fear me
When I'm in a zone of depression, gotta get a crib
Gotta get a Lac, but I can't get a job
But I really gotta get a weapon, then I be stepping
Really be stepping, and a motherfucker tell me
Start motivation draining, really run up the fat
And your shit'll get up out your purse
Everything I see I'm claiming as mine
With a motherfucking nine, you don't give and dump
Nigga we got good skills, and running endo in
You don't wanna meet that E really beat your feet
Cause I don't hesitate, to pull a tre-8 to the chest plate
Then I wanna rake to scrape the plate, with a mouth full of diamonds
And the fifth wheel, be steady reclining
Cause I got ends on a All Star Lex at first
Throwing bows like boulder blocks, elbows shining
Jaws don't give it up, what it takes don't never retire
Gotta get the glock, cause I gotta make my money
By robbing and stealing, drug dealing, try to make a million
And plus thinking bout feddy, and ?ruin my titty?
In the city of killers 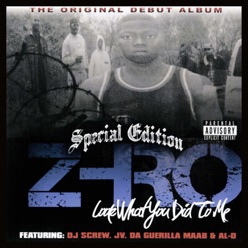 Look What You Did to Me
2017
Ver todos los discos