One-two one-two in the place to be, yes indeed
As we proceed to give you what you need
Always smokin' that 'dro weed, we have dilated peoples!

We got tension in suspense, theme in variation
Train robbery panic, description of equation
I'm after the gold, and after that the platinum
You want what you don't have so far neither one's happened
But I was told by my peeps play your cards right
Spit hard, never look back, disregard hype
That goes for bad reviews, good reviews (uh-huh)
Any press, the news, I don't watch the two, I watch for crews

"Triple Optic" cockpit views
Bird's eye, catch the rhythm in the words I use
I've learned to burn pain for fuel
Everybody plays the fool sometimes, the other side of the game is cruel
I'm back to school, the master rules
Born in the church where the pastor rules (why?)
I embrace the task that give birth to tools
And keep the pressure on that turns earth to jewels

On tracks, it's like boomerang
Sometimes you gotta let shit go to watch it come back
Evidence, presumed innocent
Move in silence, tracks covered, no fingerprints
Most are hit or miss, not what this is
Type on tour that might, hit your misses
Pack the bags, load up the pre-vo last year
We hit the road with Rage, Guru and Primo
Cypress, D'Angelo, shit's Jurassic (hey!)
Kweli and all top notch acts, keep it classic
Bill Graham presents, "Live at the Fillmore"
And after the encore, they ask for more
Fuck the IRS, I roll with I-R-I-S
'Science the best, so don't test
Exotic, attack the whack a word of advice
I got it down so cold like ice from Jew Heights

Check your fuse box, my "Cosmic Slop" brings cops
Ghetto hip-hop that your city block rocks
Say what? I bust a you and come back (hey!)
Reach under my seat for that heat that blaze tracks
Face facts, you're facin' poker faced cats
Dilated made our way through the maze, "so take that!"
For boom bap rap brought some state of the art shit (hey!)
After two L's, I'm cool like James Todd Smith
Made ya burn while the, tables turn
I teach but I'm ready willin' able to learn
These cats tryin' to eat, I'm just tryin' to breathe
And tryin' to leave a legacy that you couldn't believe
Live from D-N-D, peace to NY G's
Rakaa Cy Young on the M-I-C
Babs is clockwork, you could set your wristwatch
And the real backbone of hip-hop is disc jocks 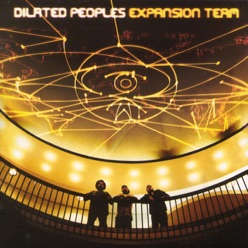