Yeah doe
Names was changed to protect the guilty

They say that will power is the shield of our lives
To defense us in this world, as I'm waitin on the coup d'etat
Machine gun in my hand, every thought is unholy
Sold my soul several times for this mighty dollar
Now here I stand again in the same predicament
Finna hit the system where it hurts
Pull off this high-powered shit like clock work
First victim make a move, ride in a hearse
Word up, for bank robbery you gotta have big nuts
But that ain't enough, you must have brains
The penitentiary is full of the fools who tried to take that risk
Only vets live to rob the game, and I'm one of the chosen few
Who ain't scared to get they fetti, but smart enough to stick and move
Run in this bitch, gettin mani for the fuckin loot
And when I get away, no clues, no proofs
Desperado, I play a tune on my fully auto
Conduct a symphony on the gestapo
They never take me alive
Drinkin orange juice and genocide
And down to die in this process of pullin a heist
If need be, I'm in the low with the turf O.G.'s
Who go about to link nationally
Go in it for the risk and for the money
But we all fiend for the green
It's like a pit, get his first taste of blood, he never be the same
Now that's realer than this gat in my hand
Or the grill on my main man
As he run back our plan
And all the savages listen, it sound easy
Like takin candy from a infant, a pieace of cake
But we all know it ain't that way
I know it's wrong, but I say a little prayer before I run up in this bank
'Holy Father, don't make a citizen misbehave
Get brave, or I'ma have to down him with this cane
And if the square behind the counter don't push the alarm
Then I swear I won't do no harm
And may my money not be laced with paint bombs
So I won't have to black out and spray some
And these dogs I'm with, they won't say nothin
But if they do, then let these snitch niggas die sufferin'
Amen, now let this hold-em-up shit begin
A couple of corners we bend
See the bank, hop out and blend in
Barge through the Savings & Loans do'
Bustin them choppers to let em know
When we say go
The security guard, he ain't no problemo
Cause for 4.25 he ain't tryin to die
And the people, they just wanna make it home
And not get dumped on, scared as hell they cry and moan
And even though the camera record I make a leap like Jordan
In a black ski mask
On the counter, "Square, fill up the bag
Do what I ask
Or feel the wrath of a fully blast
Come here, bitch"
That's when the lady said, "Mister, I just wanna live
I got a husband, two kids, a dog and a picket fence
And I'll do what you say, just don't empty the clip
She start fumblin with the keys
I'm like "Hoe, you wanna breathe?"
She said, "Oh, I got it", gate, she unlocked it
Safe was smooth open, damn near start slobbin
My peoples had the crowd face down on the ground
I'm in the vault grabbin hundreds in pounds
Fillin up my duffle bag with dinero
Stuffin it with mail, till it can't fit no mo'
Bounced outta there like 'come on'
But didn't know it was a undercover pig spread eagle on the flo'
Saw him reachin for his hideaway gat
That's when I blew his cap back
My crimeys, yeah, they follow my lead
Leave the bank lookin like Swiss cheese
Then we Audi, 500 g's
But not yet scott free
See, the hardest part is your retreat
Cause the rollers could be waitin outside least 50 cars deep
But we was greeted by the getaway car and got far
Further from the crime scene
Like some cowobys ridin on they trusty steed
Into the sunset, like we never did a thang
Check it out
You see, the moral of the story is: crime do pay
And with the fetti come the time you face
And every nigga hollerin "hog!" ain't on the same page
Sucker get his pennies pulled, he start namin names
And with the judge handin out all day
It ain't no tellin what your homey'll say
Peep the real, punk, this ain't no game
They givin niggas 30 years and some change
But my hogs must eat, so we hit them banks
Peep the muthafuckin heist 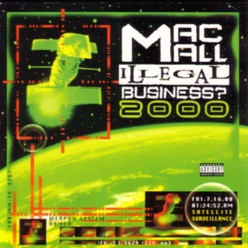