The king dissappears...
no body knows about him
all the warriors seek him every where
but the search is a failure
at the backyard of the temple of bones a little boy found a disfigured corpse
but it was faceless...
the forensick began with the autopsy, and he discovered that this corpse was the king's
because he had the secret symbols on his skin
the people from the lost lands proclaim vengeance
they will find the guilty
and now here comes the bloody chapters of revenge 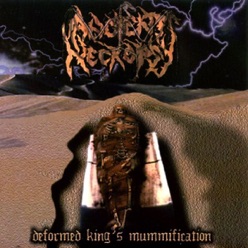