Yo V, bring that beat in
Yeah that's aight
Ahhh man!
Yo G, yo Kool G, yo
I'm doin this right here
We got Big Daddy Kane over there
We all gonna do just one part
Because you know, we came a long way
You know, from back in Martin Luther King days, Malcolm X
[Ain't hard to tell] You know, now now that we see
Nelson N-Nelson Mandela's free
We gonna talk about this, is e gonna talk about this racism
Stop that, you know what I'm sayin, we gonna stop that
So G, why don't you just do your rhymin part, and then I'll come on after you
(Aight, check it out, here we go, yo)

I'm tryin hard to explore, I'm not sure
What all the racial war for
It's makin me more sore
I walk through a color blind corridor
Seekin, for peace in the people I'm meetin
Black white and puerto-rican men are greetin each other
Just like brothers, there's plenty and many of others
You can discover, kids fathers and mothers
A meltin pot, no one felt they got prejudice
Listen I could never assist someone diss this
A landscape, with a dark and a light handshake
Havin fun, without one bein a fake snake
So let's form a rainbow over the mountain
And let's drink from the same water fountain
Let's make our Earth Day a story of
people that walk through the same territories
Color or creed, is no need for a man to bleed
I beleive, we all breathe the same seed
Unless it's diluted, for somethin to intrude it
Then I see your family tree was uprooted
So don't be foolish if you're Jewish or Hindu
The racial manual is the evil that men do
I was raised in a nation of Asian
Hate shouldn't seperate Jamaican from Haitian
So if you're givin in your ears I hope your hear me and
Siberian's no better than Nigerian
I bring a rattle to a battle that you see me in
I'm no villian so why would I be killin indians
My nationality's reality
And yo a prejudiced man is of a devil mentality
These are words of a wise man, wisdom
Take a taste and erase the racism

The ink is black, the page is white
Together we learn how to read and write
People are black, got people that's white
Let's stop racism, and, let's unite

(Yo yo Kane, why don't you do your part
and then let me do mine and then we get outta here
go ahead, bet)

In the days of slavery
Some got to run away and many got done away
Inferiority is what some men say
But that shit played out with Kunta Kinte
Then again in the streets of New York
I think of Yusef Hawkins, and I see you'e still stalkin
And when I think of barriers like Bensonhurst
Huh, notice how I mentioned hearse
We got to better this world of prejudice
People, make peace, and learn to live equal
Cause I don't look at myself as a
Coon or a mooley that would have to say massa
You better believe that I'm an asiatic descendant
And I know what's been amended and intended
So let's fulfill and get real, and try to build
a united nation, eliminate segregation
I know there's different strokes for different folks
but I've also acknowledged what hatred provokes
So don't hate me or try to underrate me
Cause I collect ends drive a Benz and live greatly
And we can all live together in harmony
Without thinkin what color is harmin me
If I'm a slave I'm a slave to the rhythm
To E-R-A-S-E the racism

To the black and the white
The red and the yellow
To all the nationalities
I'd like to say hello
And I hope they stop racism and it's comin from our hearts
Me, Kool G Rap, Polo, Big Daddy Kane, Cool V, and of course
The Diabolical Bizmarkie I hope ya stop racism
Peace 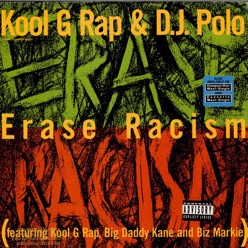