[Redman]
Hooo ahhh!
High as a motherfucker
Zonin on cloud nineteen as the Def Squad takes you
on another eerie place... of a dark side
Yesssss!!!

[Keith Murray]
I escape from the world
To show niggaz that my style is superb
For what it's worth I'm gettin off planet Earth
but I gotta redefine gravity first
So I figure I get my guns and I bust the biggest cap
from the demand of the trigger
I'm equipped to dip with a knapsack
and a survival kit, with blunts n shit (word!)
I'm in all black, ?with a face? money
wanna double to NASA, to hijack a space shuttle
More ages than curiosity
I enter the backdoor with animosity ("Yeah, here's Murray!")
Searchin for the astronauts, checkin my watch
Determined the time I had to be out
I saw my prey without a second delay
Suited up, strapped down, straight and on my way
For five seconds to liftoff I was in the Hell
when I escaped from the world

I escaped from the world (4X)

So far...
I went through a Milky Way of stars
And landed on my destination, which was Mars (whoa, shit!)
This planet was foreign and new
As I'm puffin on a blunt, observin the view
To my surprise, a spaceship arrived
Out came a Martian, with six fingers and three eyes
He spoke a bleeky type of dialect ("Bleek, bleek bleek bleek bleek bleek")
but understood my form of intellect
I said, "I'm Keith Murray from the planet Earth
Boy I'm psychosomatic and homicidal with a verse"
My hypercritical form of words busts his brains
and then the whole atmosphere changed ("What the fuck?")

I was surrounded by some Martians in the hut about to front
I used my last resort, and pulled out the Blunts
Lit it, got the whole Martian crew blitted
So now's my chance to try to get acquitted
I said, "I escaped from the planet Earth
to let my mind untwirl because I'm mad at the world
And the murder wasn't premeditated
My language was just mis-interpretated"
One acknowledge I'm right and pulled out the peace pipe
Aight? About to set the vibes right
He lit it with his finger, I smelled the Martian buddha linger
I felt good cause I released some anger
No sooner than the cease of the herb ignite
I was headed back to Earth at the speed of light
Upon my return niggaz thought I was in jail
Nah kids... I escaped from the world 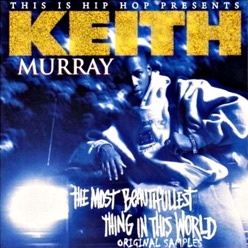