Feral Mutant Attack:
Family vacation, out in the scorching sun
stopping at Fred's oasis
buggering the tired old man
don't go out into the desert
Nothing but animals there
Fred he tried to warn em they just didn't care

Nuclear testinggrounds is where the mutants dwell
deep in the desert nobody will tell
stranded car and trailer no way to get home
oh my god! we are fucked!

Human frenchfries cooked in desert heat
not knowing the cannibal mutants
are looking for meat - dragged to the cave
which reeks like human remains unto the fire
to dine on intestines and brains
carve up the corpses
eating like savage beasts they will dine
on anything that is meat
feral clan of little cannibals
jupiter and his kids, killing for fun

Dining on dogguts, the carnage just begun
we want your flesh, hope has all gone
trapped in the camper, the mutants assault
raping the young and killing the old.....

Dad went out to find help
but he found none

Run to the hills - through the hot desert sand
find the mutants lair - out to take revenge
violent savages - out on the hunt
shut your fucking mouth
I'll slice you, you fucking cunt 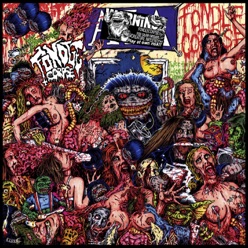