No, I don't know if I know
Though some with certainty insist
"No, certainty exists"
Well, I'm certain enough of this:
In the past fourteen years
There's only one girl I've kissed

In the blistering heat of the Asbury pier
We sat quiet as monks on the Ferris wheel
Until looking down at the waltzer and out at the sea
I asked her "do you ever have that recurring fantasy?"
"Where you push little kids from the tops of the rides?"
She shook her head no I said "oh, neither do I"
And with my grandmother's ring, I went down on one knee
And the subsequent catastrophe, has since, haunted me

Like a fiberglass ghost
In the attic, my inconveniently selective memory
As provisionally "You"
Mercifully withdrew
All the bearing points we thought we knew
Day's run, day's set plot
Our compass shot
We sailed waywardly on
Singing out midnight archer songs
Until well past dawn
It's still dark on the deck of our boats
Haphazardly blown
Broken bows, our aimless arrow-words
Don't mean a thing
So, by now I think it's pretty obvious that there's no God
And there's definitely a God 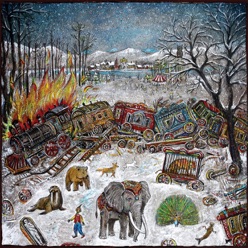 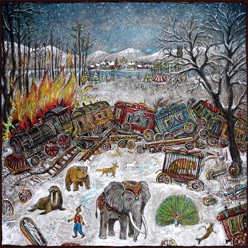