From the Ground Up

[E-40]
Testin testin
It's game orienfested, size six-ex vested
K-Cizee.. JoJo... that boy Too Sheezee, Todd Shaw
and Earl Stevens, a.k.a. Charlie Hustle
Hey Todd, you on? (Am I on?)

[Too $hort]
The foundation was laid several years ago
I built a whole empire in your stereo
Got a four leaf clover representin the Bay
Oakland, Frisco, Vallejo, and EPA
We keep the shit together, let's keep it that way
From Sacramento all the way to San Jose
We in a new era, for ten years you made hits
so what's up E-Feezi? (We still the shit) Beotch!

[E-40]
How you think I got this pot belly, overnight?
Shet a nig-ga was hongry, I had an appetite
Just like a lie to my people that's caught up in the struggle
Motherfuckers tryin to bubble, niggaz tired of slangin
Barney Rubble, gettin in trouble and fuckin up
Parole got me makin my kids piss in a cup
It's cold, that's why I got a few bucks, I put up
from sellin greens, investing in some vending machines
From the ground up

[E-40]
From the ground up, here go some details
This verse right here was made, said strictly for the females
Don't y'all know it's time for y'all to blow up, like Napalm
Instead of sellin Tupperware, and Avon
Get your business license, go on and put the peas in the pot
Tell your baby to get your baby daddy to buy you a nail shop
or a beauty saloon, since he come to be the biggest tycoon
with methamphetamine laughs and heroin balloons

[Too $hort]
Six po-lice pulled me over laid a nigga on the ground
Searched my car real good I know you know what they found
I had the trunk, full of that junk
X-Rated lyrics, laced with the funk
No doubt, I was just about to flood the streets
Big boxes full of tapes with them dopefiend beats
Two white boy groupies, mad as hell
Black men makin mail, couldn't take him to jail

[Too $hort]
I spent sixteen hundred makin Born To Mack
Used my niggaz gold ropes and his Cadillac
I was broke to start with, didn't give a fuck
Couldn't tell me Short Dawg wasn't comin up
When motherfuckers roll by bumpin your stuff
It makes you feel good, like when you bust a nut
Now I'm a millionaire, and can't get enough
Forty tell em how it is (way too tough Short Dawg)

[E-40]
When I first started rappin motherfuckers would cap!
"That nigga fake he sound like Woody Pecker on crack (ha ha ha HA ha)"
Niggaz would laugh and say I rap too fast way back then
But now I be catchin all kind of motherfuckers
tryin to sneak my little old style in
And that's a compliment, cause I ain't trippin on the money
(what about the money what about the money)
Ask me, sheeit, I think there's enough money up in this bitch
for all of us, we can Sasquatch pimp the system without a doubt
All we gotta be is bout our paper route

[E-40]
That's real, Too Sheezee, Ant Banks, Forty Fonzarelli
K-Ci and my nigga JoJo we all come from the ground up
BEAOOOTTCH! 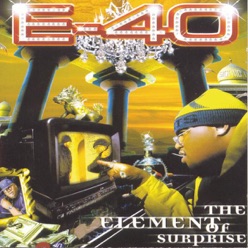