[ VERSE 1: W.C. ]
Yo Aladdin, make sure my microphone is on
No wait a minute - hm-hm, now let me check my tone
(Before I start rockin) Yo, what we're callin this homes?
(Ain't nothin goin on...) word
Well, if it ain't nothin but a funky song, I'm in it to win it
Properly fitted, so let's get with it
My lyrical format breaks and bends the rules
For those of you who wanna battle my crew
I come from the family down with Priority
Peace to N.W.A and Eazy-E
And to the homies everywhere that's down with Low Pro
Y'all want funk? Yo, yo, now here we go
Can I come on, or should I come off smooth and dope?
Spectacular, I make a amateur choke
You see, it's gotta be funky, doper than the average funk song
That's why I didn't come off strong
I chose a laid back jack and watched the others swoop and holler
They try to kick funk, but yo, why did they bother
This is pure funk, so y'all sing along
(Ain't nothin goin on but a funky song)

[ VERSE 2: W.C. ]
Funk - the word for the day that I speak upon
It's like a drug, you could say that I'm sprung
Every time that I speak I pertain to a funky crowd
Turn up the radio, make sure that it's loud
The woofers are bumpin, the tweeders and tweetin
The bass is kickin, Doub's about to start rippin
All these MC's sound alike screamin off of funky tracks
Got the nerve to put the garbage on wax
Artificial MC's, I break em with ease, they get dunked
They all lack the true meanin of funk
A street hardcore sample with a positive tip
This here is so funky, all I need is a mothership
A pair of twelves and a mic in my hand, see
So I can get busy for those down with me
Have you yellin my name while I pertain to the brain
Cause when it comes to funk, I'm leavin permanent stains
So change arrange and yo, I ain't a new jack, gee
Aladdin gave me the mic, so I couldspeak my piece
Funk, the universal language, now can you swing it?
Some tried, but came softer than a Danish
Dunkenhein rappers is soft, they can't compete
Now here's a dope record tooken out of the backstreets
Y'all know the words, so yo, sing along
(Ain't nothin goin on but a funky song)

[ VERSE 3: W.C. ]
So now we come to the final verse of the song
I came to short-circuit, so go and clap along
Wave your hands in the air while you shout and go off
But keep away from the stage, because you might get tossed
Yo, now here's somethin that I know that you like
Somethin funky, but yet though, it's gotta be hype
So sing along, even though when I'm gone
(Ain't nothin goin on...)
Peace
(...but a funky song) 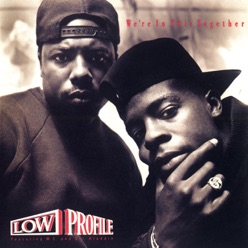