Gone With the Wind

Damn!
Standing here brings back a gang of memories, man
Sitting on this old block
All the violence and drugs you know
But I lived through it
Get this shit on, yeah nigga, you and them
Motherfuckers
Rest in player pieces my niggas
Blaaow!

Innocent bystanders be laying up in the streets
In the concrete jungle where real niggas be packing heat
Leaving your insides exposed to the witnesses walking by
Here today and gone tomorrow my nigga, we born to die
Keep your eyes open partner, ain't no rules in this shit
My nigga died with three kids and a wife, ain't that a bitch
I can't go clubbing because I'm thugging with some G's for real
I see some niggas at the party, then I'm subject to kill
Keep my head over the water, uzi in the stash
Niggas try to wet me up that's why I dumped on they ass
I had a homey named ?Money' now he's R.I.P
Niggas set him and killed him for some key's and g's
I don't know why they fuck did it, niggas plotting and scheme
That's why you can never be blind to a broke man's dream
Because see I'm losing it. I can't take it. I miss my peers
Talk to my nigga, Makaveli. He's been dead for two years
Episodes of divine intervention, invade my mind
Got me thinking, damn I could've been dead, a couple times
Killer pits and extra clips, around my bed when I sleep
Stash my glock under my pillow, twenty gauge by my feet
Sitting on my old block reminiscing again
For my homies dead and gone in the wind
Gone with the wind, gone with the wind
Gone with the wind, gone with the wind

Too many niggas smile in my face and back stab
I'm left throwing niggas in the trunk and kidnap
Thugging and loving bitches obsessed with this mob shit
Niggas thinking they moving
And bailing out the cut with the quickness
Suckers be blind to this real shit, we bring the pain
Bossalini, Fetty Chico, Shiznilti still in the game
Immortalized forever, having my homies up in the grave
Thinking back on when I used to drank yac in my younger days
Bust the twelve gauge shotty, too young to buy liquor
Little bad ass niggas grew up to be mob figures
Living life on a razor; cars, money and bitches
Niggas plotting to kill us, coming in coupes in a milli's
We go to war ?til they feel us, bury they ass on the realest
(not sure what is said) eliminate you for scrilla
Niggas dying on the frontline
Spending most of they life ducking the one time, no sunshine
In the world of sin, from the gutter to the pen
Got me swimming in the game with a brim on my shark's fin
Sitting on my old block reminiscing again
For my homies dead and gone in the wind
Gone with the wind

Gone With the Wind de Spice 1 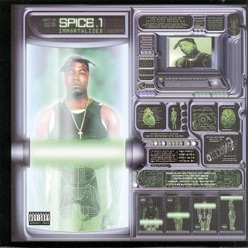