Me First and The Gimme Gimmes

Mary Anne and Wanda were the best of friends
All through their high school days
Both members of the 4H club, both active in the FFA
After graduation
Mary Anne went out lookin' for a bright new world
Wanda looked all around this town and all she found was Earl

That Earl had to die, goodbye Earl
Those black-eyed peas, they tasted alright to me, Earl
You're feelin' weak? Why don't you lay down and sleep, Earl
Ain't it dark wrapped up in that tarp, Earl

The cops came by to bring Earl in
They searched the house high and low
Then they tipped their hats and said, thank you ladies
If you hear from him let us know
Well the weeks went by and spring turned to summer
And summer faded into fall
And it turns out he was a missing person who nobody missed at all

So the girls bought some land and a roadside stand
Out on highway 109
They sell Tennessee ham and strawberry jam
And they don't lose any sleep at night, 'cause

Earl had to die, goodbye Earl
We need a break, let's go out to the lake, Earl
We'll pack a lunch, and stuff you in the trunk, Earl
Is that alright? Good! Let's go for a ride, Earl

Goodbye Earl de Me First and The Gimme Gimmes 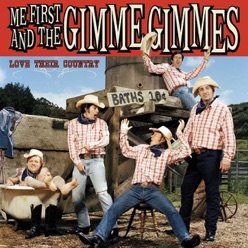 Me First and The Gimme Gimmes en Mayo