Well, it's the E wit the juice, I'm down to get loose
Strapped in black wit the nine by the boots
Hardcore funk that make ya wanna pump a chump
My posse's thick, so I will never get jumped
The slayer, a beast from the east, I'm psycho
If I had a glove, I would be Bad as Michael
Some say, yo, I sound rugged
Pack wit the ultimate rap wit the Power like Snap
A.K.A. the Mic Wrecker
A rap star wit the boomin style, black as tar
Smokin, the E's no jokin, so don't trip or flip
And make a hit, so bust it
Some ain't feel the way I do when I get wreck
No half steppin, I kick back like a weapon
On the microphone, I delight
And groovy, a California quake couldn't move me

No lights, no camera, but lots of action
No moonwalkin backwards, kid, like Michael Jackson
Strictly funk flows and steel toed Timb boots to troop
State to state, stage to stage, as I clock loot
Black Asiatic, rapper fanatic, automatic
black nine mil is what I pack so kill the static
EPMD quench the sound of thumps underground
Ya stupid boy, no props here, you catch a beatdown
The Squad still in effect, no record skippin
Ya stupid boy, keep the track, still bullshittin
Down wit the rap pack, still grabbin my bozack
Here's a ticket kid to ride the Jim like Amtrak
Got mad skills, hi-tech, been known to snap necks
From eighty-seven to ninety-two, fourth cassette
But now I'm Swayze, ghost, the rap host
Who rip shows, from coast to coast

Yea, back to the picture, the scene
It's me Erick Sermon, my M-16
Just in case, ya know, a fight broke out
I can just chill, pull out the smoke out
One, no grill, no charcoal, no fluid
Act like Bo Jackson, Nike, and Just Do It
If there's a problem, the Hit Squad rolls mad deep
So I can rest my head and get some sleep

While the E-Double, takes a nap, no time to slack
It's my turn to guard the fort, ready for combat
Guns and violence, that we don't promote
Just takin what's ours kid, chill or smell the gunsmoke
As I pull out, squeezin like Mr. Charmin
Destroyin posses of demo tapes like Agent Orange
So chill kid and act like you know
Peace from the MD a.k.a. Slow Flow

It's Going Down de Epmd 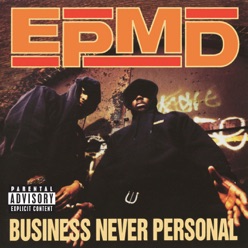