Pain from a rap cat
Man you didn't know that
Three AM, man, we bumping Bobby Womack
My homie keep all his bullets hollow
That's why I smell like Salvatori Faragomo with the diamond sparrow
A rap cat with the BOSS apparel
I put my rhymes on your block then I run it just like little Darrell
Money and dope, man, don't come for free
Man, I don't have no competition, ho, all I got is enemies
I turn around like a tornado
Rock it like a baby cradle
Call me Doctor J if you a baller and it's getting fatal
I make MC's do angel dust
Take 'em to the Bay Bridge, make 'em strip, tell 'em jump
I don't know why I get high
I'm so in love with money I keep spending 'til it runs dry
Hot like a kettle, when the pedal hits the metal
Pinocchio you know son is Jepetio, hello
Deep fried just like Friday fish
A lot a hot sauce, now we got it popping in this bitch

Yeah, in anything I do I put my everything
Always feeling deep inside just like Mary J.
Ha, I'm never panicing, I'm bored stiff as a mannequin
Grew up fast just like Anakin
Baby its gullible, its Alice in Wonderland
All the excuses in the world I can't understand
Cause I'm a man of these times, the man to get high
Blow big, but my gross is family time
Ain't no way to intervene in my industry
Moving quicker then a centipede on enemies
One of a kind, once in a lifetime rhymes is written
It goes on, as long as time commences

[Chorus]
Shit, it's like a jungle sometimes
It makes me wonder how I keep from going under
When they hit me with the thunder and lightning
Its trifling, enlightening, and frightening
Some might think that it's even exciting

I'm like a Harley Davidson motorcycle, born to ride
With the force that the courts call the last Jedi
I'm like a veteran, off Excedrin's
Cause I be getting headaches from these Letterman's
I asked this little freak about my rap style
She said, "It's so damn dope they might take you to trial."
I hit the weed like I'm kamikaze next to the cosmos
Chopping up shit, yeah, with Quipto and Vago
Raps like a Tommy gun, watch how the body run
Raps from the Tommy gun will make anybody run

I'm bout to go in like a movie, but no stunt double so parachute me
But somehow I feel I survived on a fluky
I have to hit the scene, livin' out my dreams
Then I said I was sorry to DJ's and MC's
Complete to everyone who kept their ear to the street
Then my homie came through with the Al Capone Suite
Got twice as deep, don't forget, you know how low they get
Intimidating so I pose a threat
Coming like a slider, right by ya
Known to drop a rhyme in on time, and prescribing accurate alignment
The center of attention, we'll bend a agenda
To enter this rap game the number one contender
The outta sight, and dope lyrical white, and watchin' tricks fightin'
Hyping up the crowd late night, and watching Tennessee Titans
Everybody just loving because we like and
I strike in first class light fast, just like lightning

I force my rhymes in your veins like hot shot of heroin
You'll got cold turkey trying to work me
It's like a pad lock, when you in the headlock
Six in the morning and you didn't here the Feds knock

[Chorus]
It's like a jungle sometimes
It makes me wonder how I keep from going under
When they hit me with the thunder and lightning
Its trifling, enlightening, and frightening
Some might think that it's even exciting

I'm consistent, adding all statistics
Why don't we cover the spread like the bitch never existed
Phonographic rotate the plastic spinning
Living like I'm knowing it's gonna be a drastic ending
Playing classics, meditating these tactics to overcome
The show is done, anticipating to roll a blunt
Baby, getting anxious, hitting and I can't miss the focal point
When locals say, "He ain't shit."
Man it's Equipto, put it all down for my homies
And rolling my weed right next to the police
Nothing but love for all my homeboys hustling drugs
Up in your program fucking it up

I'm in the fast lane, the cash lane, some think it's a bad thing
Hitting 'em off with the see & H pure cane
I get stuck in your membrane
I'm like a pimp at a party when you say look at them rings
I use a Motorola, the mood is baking soda
Whether it's in Denver, man, Houston, man, or North Dakota
With no apology, tech-tech-tech technology
Some brother disin' me, or even thinkin' he
I got the soul and the spirit of the wrath of Kahn
Kick back and write just like the holy Koran

[Chorus:Repeat x2]
It's like a jungle sometimes
It makes me wonder how I keep from going under
When they hit me with the thunder and lightning
Its trifling, enlightening, and frightening
Some might think that it's even exciting 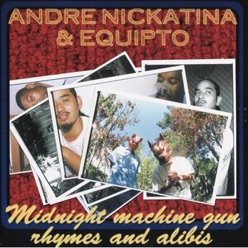