Hay-ya!
'sup
Got my homeboy jazzy ren in the house
This is the mighty king tee
And my homeboy dj aladdin is in the place
Blunt-smokin mike
And I'ma flaunt these lyrics right here

Moves - I got moves for the mind
Kind of weary but if you hear me, you'll find
No one could conquer the kingdom I resurrected
Perfected this, watch out, there's a hectic
Man on the stage, screamin out a page I wrote
The type of shit mc's wanna quote
And get broke off somethin real swell
Cause I can tell you try to swell when you bail
But you ain't big, don't try to stick out your chest
Just phantasize you bein the best
Not a clear picture, huh, not vivid
Mediocre mc's can't deal with this
And what you're hearin now is tha great
(is that right? - oh yeah, he's back, for haven's sake)
Yes, I'm comin, I'm bringin what you're wantin
It might sound like I'm goin off, but hey, I'm just flauntin

(suckers try to knock him but they never succeed) --> w.c.

Back at home I got a throne where I sit
Piecin up metaphoric bits
My style is the quiet, cool gangster type
But when the 40 hits, it gets hype
Niggas can't understand and trip
When I be rockin that old school shit
That I used to play when I rolled like a professional
Hittin side to side in my fo'
Flauntin the technique just like when I speak
My words come above the average peak
E can get swift with a scratch
( *e-swift scratches a quote* )
People keep askin: does king tee still have his coupe?
Or will he flip and make a song like 'knockin' boots'?
Come on, hop, picture that on a flick
I ain't goin out like a trick
No matter what you do, I always pop up, troop
(like what? ) sort of like if I was wild rumour
And this is how you pump it when you're livin in compton
Cause it ain't about nothin but flauntin

Now homes! (what up? ) homes!
I need headphones to hear the funky tones
No more switchin, I'll pitch the bitch and
Now we're gonna swing
With the coolest king
The imperial
I'm the one that makes you go buy your stereo
So you can hear me flow
And bro, on the microphone I'm a flexer
You got played, and on the mic you're a extra
I go deep for the dope style and I stay sharp
Frame my lyrics up like art
Mc's keep on runnin cause my tracks are stunnin
Back in '85 is where I spun, and
Up jumps the crowned royal king of cool rap
And when I rock the joint, they be like "who's that
Fly rappin nigga? !" and rappers be like, "pull the trigger
Let's assassinate king tee tha great"
But faith keeps me on top of the crop
With a 40oz. of beer and a blunt full of pot
And this is for the suckers that be frontin
It's king tee tha great, in '92 I'm just flauntin

I wanna say peace to my homeboys dj aladdin and dj pooh
My homeboy mc jazzy ren
Blunt-smokin mike
Youknowmsayin?
And we outta here
On out 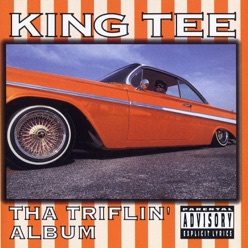