Lawnmowers For Heroes, Comics For Zeros

gone, Comics are for pre-pubescent moronic slime
Who've got nothing better to do with their time, The one I most hate is
Superman, An underpant wearing flying phallic gland,
On Krypton he collects his strength and girth, I wish he'd been aborted at
birth, I hate Dan Dare and the Mekon with no hair,
They live in space, I wish they'd stay up there, stupid comics full of space
ships, I'd rather read a magazine full of
gardening tips, Batman and Robin help people out a tight spot, Batman and Robin
so fucking what, They live in Gotham, what do
they want, a clap? If they lived in Bradford they'd still be crap, Swamp thing I
really do despair, Looks like a marshmallow
with seaweed of hair, What kind of hero is that supposed to be, A walking giant
sea anemone, Come and join me in the human
race, Where there's no super heroes in cartoon space 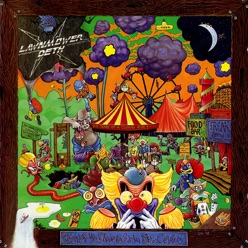