ORIGIN
Kingston, Jamaica
FORMED
2008
About Major Lazer
Originally launched at the end of the 2000s as a dancehall reggae-influenced side project of two taste-making dance producers, Major Lazer gradually became one of the most popular acts on the planet, driven by a world-uniting mission to "make the party bigger." The group have collaborated with, produced, or remixed dozens of acts from around the world, including megastars like Beyoncé, Nicki Minaj, and Ariana Grande, and have always kept their ears on emerging styles and scenes, including reggaeton, trap, and electro-house. First emerging with the acclaimed 2009 full-length Guns Don't Kill People... Lazers Do, Major Lazer were a crucial part of the EDM boom during the 2010s. Their carnival-like live performances began attracting bigger crowds, and by the middle of the decade, they achieved record streaming numbers for their biggest hits, including 2015's "Lean On" and 2016's "Cold Water." Also in 2016, they played one of the first major concerts in Cuba following the restoration of diplomatic ties between Washington, D.C., and Havana, subsequently releasing a documentary of the event titled Give Me Future.nnMajor Lazer was formed in 2008 by producers Diplo and Switch, who had met years earlier while producing M.I.A.'s first album, and subsequently worked with Santigold. Recorded at Jamaica's Tuff Gong studios, Major Lazer's debut album, Guns Don't Kill People... Lazers Do, featured vocal contributions from noted dancehall stars including Vybz Kartel, Busy Signal, Mr. Vegas, and Turbulence, as well as Santigold, Nina Sky, and rapper Amanda Blank. Much anticipation and online chatter were fueled in part by the novelty video/song "Zumbi," featuring the comedian Andy Milonakis; the frenetic, legitimate lead single "Hold the Line"; and an invented backstory about a renegade Jamaican commando with prosthetic laser arms who was allegedly a Zombie War veteran and vampire-fighting C.I.A. operative (but was demonstrably a rampant Twitter user). The album was released in June 2009 as a joint venture between Downtown Records and Diplo's Mad Decent label. Lazers Never Die, an EP with two new songs and three remixes, followed in 2010, along with Lazerproof, a collaborative mixtape with the English electro-pop duo La Roux.nn In 2012, Snoop Dogg joined Diplo for the digital reggae single "La La La," released under the name Snoop Lion, while Switch announced he was leaving the project. Likewise, hype man Skerrit Bwoy left in order to pursue religion. Diplo carried on, with producer Jillionaire joining the group for Free the Universe, their sophomore album. The 2013 release featured Wyclef, Bruno Mars, Vybz Kartel, and Shaggy on its long guest list. Sean Paul and Pharrell Williams joined the party for the 2014 EP Apocalypse Soon, which was also the first Major Lazer release to include Walshy Fire, who had replaced Skerrit Bwoy as the group's live MC. The 2015 album Peace Is the Mission featured the massive hit "Lean On," plus chart-topping guests like Ariana Grande, Ellie Goulding, and 2 Chainz. It was also supported by an animated series that aired on the FXX cable television network. An extended edition of Peace Is the Mission appeared in November 2015, sporting five bonus songs. In 2016, Major Lazer scored their biggest pop hit yet with "Cold Water" (featuring Justin Bieber and MØ), which topped the charts in over a dozen countries. "Cold Water" was followed in late 2016 by "Believer," which featured production by the Dutch duo Showtek. "Run Up" arrived in early 2017 and was a collaboration with Nicki Minaj and PartyNextDoor. The six-song EP Know No Better appeared in June; its title track featured Travis Scott, Camila Cabello, and Quavo. Other guests on the release included Sean Paul, Busy Signal, Konshens, and Jidenna. Additionally, the group released the soundtrack to Give Me Future, the documentary about their historic 2017 free concert in Havana which was attended by around half a million fans.nnIn 2018, the trio issued a series of singles, including "Miss You" with Cashmere Cat and Tory Lanez; "Let Me Live" with Rudimental, Anne-Marie, and Mr. Eazi; and "Tied Up" with Mr. Eazi and Raye. Double-disc collection Essentials rounded up 25 of their biggest singles to date. They also released Afrobeats, a brief mix CD showcasing the African dance-pop movement. ~ K. Ross Hoffman 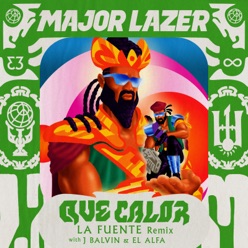