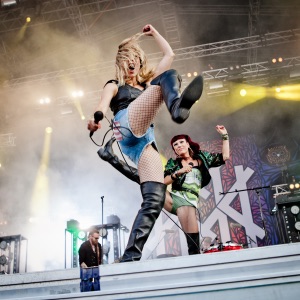 ORIGIN
Finland
FORMED
May 18, 2021
About PMMP
Centered around vocalists Mira Luoti and Paula Vesala, the Helsinki-based PMMP -- which has also included drummer Heikki Kytölä, bassist Juho Vehmanen, and guitarist Mikko Virta as members, along with significant assistance from producer, songwriter, and longtime friend Jori Sjöroos -- is a band that debuted in 2003 with "Rusketusraidat," a single that was met with immediate success, beginning their ascent to status as one of Finland's most popular music acts. From 2003 through 2005, they released three albums: Kuulkaas Enot!, Kovemmat Kädet, and Leskiäidin Tyttäret, all of which peaked within Finland's Top Ten album chart. Their sound is likely to vary from song to song; they're equally adept at whipping through simple but sharp punk-inspired numbers and drifting through dreamy, melodic pieces, which partly explains their appeal to both teens and adults. ~ Andy Kellman