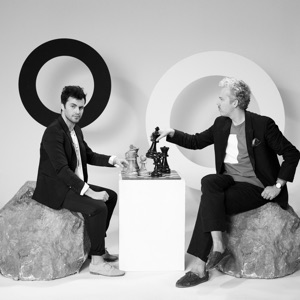 About Polo & Pan
French electronic duo Polo & Pan create a distinctive niche where pop sophistication, artful songwriting, and breezy house and disco mingle amid a sense of fashion and fun. Citing influences that range from composer Maurice Ravel to electronic pioneers like Air and Giorgio Moroder, Parisians Paul Armand-Delille (Pol) and Alexandre Grynszpan (Pan) joined forces in the front half the 2010s, landing on a playful and elegant sound born out of club music but with a strong pop sensibility and a quirky approach that earned a devoted fan base with creative efforts like "Dorothy" and "Canopée." After a series of EPs, they made their album debut with 2017's critically acclaimed Caravelle.
Prior to teaming up, both musicians enjoyed successful solo careers as DJs; Armand-Delille used the name Polocorp while Grynszpan performed as Peter Pan. After meeting at the Paris club Le Baron, they started mixing together and eventually composed music as a duo. Their 2013 EP Rivolta introduced fans to Polo & Pan's unique sound, which evoked a sense of stylish nightlife nostalgia that stemmed from the early 20th century, and combined it with smart electro-pop and house, sometimes with a tropical flair. The Dorothy EP followed in 2014 with the title track earning millions of streams. Further EPs like Isolated Beach and Nanã arrived over the next two years before the duo released the full-length Caravelle in 2017. A critical and commercial success, the album was re-released in a deluxe version the following year and was eventually certified gold. Meanwhile, Polo & Pan continued their prolific run with two more EPs in 2019's Gengis and 2020's Feel Good. ~ Timothy Monger