The music you hear -even the voice- especially the voice is constructed entirely from bones breaking, blood flowing, and the like. A fly in flight supplies us with the note "F", a humble bee "C", and so on. So it's not really music but it is (fantasy and reality) The massed ranks of the Blackstone military band made exactly the right cacophony. Even now I relish the old time inanities when they're revived on the radio, for they recall the lost illusions and optimisms of their initial ululations -50 year old punks 90 year old teds dead hippies Erich Zann's viol E Major has a quality all its own harsh, fierce, and strong -A shout of joy! The bass captures the neutral grey and the extremes of white and black, whilst we mortals must confine ourselves to the more pedestrian inner spectrum. Primal primary colours. We are the band playing in front of the funeral parlour, we are the
Arkham hearse's drunken drivers. The oldest and strongest emotion of mankind is fear Bergson said that by studying the maps, pictures, guide books, and plans of Paris, it is possible to discern the weight of monuments, the height of statues, the distance between landmarks, and the like, but that any amount of such contemplative visualisation is vastly inferior to a ten minute walk along one of the great city's magnificent boulevards. I have been to Paris in company with Poe in a dream. If I were to think of a name of a band, Rudimentary Peni would be the last thing I'd come up with, and if I did I'd probably dismiss it immediately. But some people have decided to call themselves precisely that... And the Peni, as I'm sure you've all realised by now, were an ancient hill tribe hailing from what is now Shipley Yorkshire, who defeated the Roman legions at the notable battle in I think 53BC -what a name to be lumbered with. O well, it's their decision -what's in a name Ravenscroft? Rudimentary, my dear Peni. I take all the noises you made in the world, eat them -spew them regurgitate them- excrete them - bury them - shoot them off to the stars Thunderous music hemispherical cosmic temple - executor of extraordinary proficiency 'pon the forte oddest pitch gusting turbulence ye gods I've penned tri-tones. I must be away to confession And I died singing this song 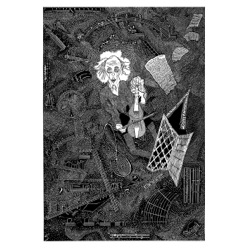