(K.M.G.)
Seems never, no hesitation for my frustration
I feel the years that i'm facin', so it's here money track, i'm lacin'
With that Gothic lifestyle that i'm used to, voodoo,
Bent back with a bag of gumby and the hindu.
Twelve playas, way, beyond control
Lookin' for two or three bustas that done sold they soul
See my name is K.M.G. (Whoop whoop), do ya know me?
I think ya lightweight like your see-through homies
Hold this, while I smoke this, make you focus on the pistol & the chrome
And the homie fly as, California born.
We shake down, at the Calabasas home,
And when we throw a gathering, ohh baby it's on.
See we, shake off the bustas, we got the cops checkin',
Come down on imitators with they fake jail records.
Yea, we use our method, our soul searching method,
And when we on the block after dark you might catch it.
Disrespected? Never that. Cali West Coast bellin',
Check out all my homies with they colors (Blue and red, much love)
Mi amigos, I got my homies daring ya,
Moody lifestyle mid from the Bay Area.
We like anderson, come ask for free,
Soul searching with that nigga K.M.G, (K.M.G.)
Soul searching with that nigga K.M.G. homie, (K.M.G.)
You don't want to fuck with me...

(Chorus X4)
Why can't you see the light?

(Yukmouth)
Nigga, I was raised in a house full of dope fiends,
Admiring ballers who sold cream, my street dream
Like Nas, mansion and four car garage,
Keep trust in God with mob niggas in my enterouge.
You see that's why could be for broads,
I learned that from my pops when we used to mob the eldora-do,
Through the muthafuckin' projects, I guess it's in my blood,
Sometimes it seems like i'm next, to be a thug.
And end up selling drugs like my father,
Or like my partner on the block, man, when I holler, squattin impalas
Slanging rocks, man, it don't stop,
Keeping the glock up in the cut 'cause niggas know I, get sho' stopped
For yo bread, niggas drop dead, of hot lead,
"Shot him up" that's what the cops said, a code red
Call the muthafuckin ambulance,
Could've ran but then again he never had a chance,
For soul chasing...

Soul Searching de Above the law 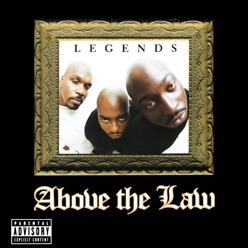 Above the law songs in January