Fourteen years with little change,
They look for in whom to place the blame,
Fade is the post upheaval bliss and the majority still live in shit.

Deliberate attempts to misdirect has them reaching for foreign necks,
The anger that this inveighs placates dissent so it stays,
We watch even though we have all seen it before,
We watch the violence still,
Leaves us in it in turn covers what's at heart,
Of what caused the violence at the start.

Marauding hordes tear through the camps,
Malawian were given little chance
With flames to light and rocks to crush,
They leave the people dying in the dust.

The hysterical contagion is let loose as they carry on,
It's complicated,
Why are we hated like a sickness?
The more blood that spills inspires more to start to kill.

The Ramaphosa bears the brunt of the poverty-based human hunt,
The squatter begins to flee as the drive is made for purity,
The question one is forced to ask:
What happens when this land is pure at last?

The Peaceable Kingdom de Fucked Up 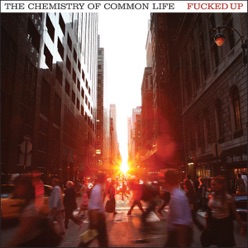 The Chemistry of Common Life
2008
See all discs

Fucked Up songs in January