They were searchin' for stars when we came along
It was rock 'n roll in a country song
There were five of us thinking that we can
This is the life and times of a traveling band
Hollywood had a funny face
So we took our chances and we got away
Back to Nashville, Tennessee
Hobie, Bobby, Jim and Joe and me

We heard our song on the radio
Along with the "Gambler" we hit the road
All across the USA
We were gypsies on parade
We were all about three chords and the truth
We wrote our songs on the bus, in the booth
Some go fast like "Some Girls Do"
Some go slow like "Used to Blue"


When the lights went down
We could hear the crowd

Fame and fortune don't mean much
Without someone to hold and someone to touch
Some wives left, some stayed on
So who do you love when the beat goes on
Now we're 27 years and a million miles
Shifting gears and changing styles
We said goodbye to old DC
Now it's Hobie, Shayne and Jim, the Joes and me

I'm in a travelin' band 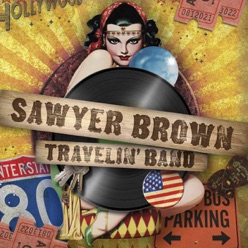