A Hill To Die Upon

"The time for war has not yet come, but it will come, and that soon; and when it does come, my advice is to draw the sword and throw away the scabbard."
- Thomas "Stonewall" Jackson

The double-headed eagle goes back to several thousand years B.C. with the Hittites and remains today in several coat-of-arms, the Albanian flag, and the Teutonic order.
This creature is such an amazing enigma that it was our first choice for the album cover and became the perfect symbol for this song of war.
It is common usage today, for sure, but we felt this eagle, along with Prometheus, had so much more to reveal.]

The Twin Heads: "Two beaks tear at a thousand nation's eyes
Wings beat upon the ears of all who dare to fight

My light shineth the way
Forward through ash and fog and fear
It is flaming madness I see... in all whom I command!

Two beaks tear at a thousand nation's eyes
Wings beat upon the ears of all who dare to fight..

The Warriors: "Beholdeth what we cannot see
God of gods!
Law by nature, by will alone
Infinite Titanic Immortal

Oh! Faceless might
Grant us the sight
Through the ash and flame
The Hymns of chaos rise!"

Twin Heads Of Vengeance de A Hill To Die Upon 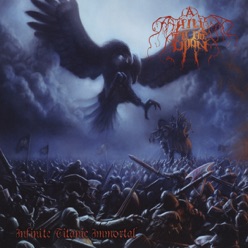 A Hill To Die Upon songs in December