First let me explain that I'm a hustler
Now here's an example of what a hustler must do
In this lifetime you got two things
Bad and good, and ain't nothin in between
Now I'ma break down a little slogan
So you can figure out the path that I'm strollin
Some say it's hard, some say it's dirty
Some say it's all sex, money and murder
Now me myself, see, I'm a hustler
And I rather be that than a new jack buster
I'm always known for doin somethin
Cause I'm always in the mix when the shit start jumpin
At a club and at a house
If a sucker disrespect, I get upset
Now I'ma make my plan to get with it
I'ma hit, and seek, and destroy it
Now what could I really be sayin?
That all set aside, that I don't be playin
187's a killer, even iller
And I'm also a thriller
And of course I'm untouchable
It's not what you know, it's what you can prove
(For the so-called law) --> MC Ren

See, I got to misbehave, just a little taste
Push up, increase, yo, I start the phase
New lyrics, breakin like a running rebel
For the words are defined, cause we're on a higher level
Cause I'm goin out with Jack in my system
Hustlers from the house, you can just list them
Lookin for some heartbeat, ready to rumble
If I spot a soft sucker his world's got to crumble
Pardon me a moment, I be just at it
Brothers claimin what ain't there, they're rhyme bandits
I will arraign my death until I reach my peak
And if the king slip, I've got to impeach
(KM.G, do you have the contacts?)
The homie Ant, K-oss with the dope tracks
On the 12 spin, behind his back
2nd DJ jumpin off is Go Mack
On a mission to keep on dishin all fools
187 got the right, cause we wrote the rules
Lyrical techniques keep fools in a daze
Straight up your panjacks just to hear me faze
(Now what about the brother we took out?
Don't sweat him, cause he didn't have no clout
Cause yo, in attack I broke his back, I show no slack
And I never got caught because
I'm untouchable)
It's not what you know, it's what you can prove
(For the so-called law) --> MC Ren

Untouchable, on the Cali streets
On the corner where the dope and destruction meets
Where a cool young brother could never be soft
On a top-dollar street where sh*t jumps off
You're never up on a, tagged as a tinted
You're tryin to get out, but you're already in it
Cause pooh-put suckers don't amaze me
Cause I live my life wild, ruthless and crazy
If I don't hit you, you probably hit me
How could it be, I'm the illustrator KM.G
And see, that's just one thing that never happens
KM.G, 187 - lose when we rappin
See, we slide out some suckers who be nappin
Grab the mic, put in the clip and commence to start cappin
Cause when we flow, we got dignity
And we're givin the world an opportunity
That there's a lesson to be taught when you come to our show
Cause we scratch on our table, and bust the rhyme flow
Plus our lyrics is steaks, and rhythms come clean
Do damage, break backs, if you know what I mean
We stay untouchable
It's not what you know, it's what you can prove
(For the so-called law) --> MC Ren

Untouchable de Above the law 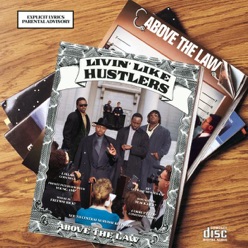