An Indomintable thirst to delve
And propagate my surgical addiction,
We have to see, we have to know
Calculus of a disorder
Intricate to my dismay...

Methodically I purse
With rusty hooks and skews
Muscles are ripped from bones
Such an eloquent bliss, my irreverence, insatiable quest for "knowledge"
So many ways, aesthetic deeds to reset the boundaries of pain

Evisceration on demand, the emetic stench of human misery
A descent into euphoria, a genocide, the path I have to take
Miscalculated dysphoria, as I bear witness the hunger doesn't fade
I am a pathogenic mystery, a plague restored with rage

An Indomitable thirst to delve
And propagate my addiction,
We have to see, we have to know
Calculus of a sadistic disorder
Intricate to my dismay...

The first chapter in a bloody trail
The apparatus in process to dissect
We have to bleed, we have to rot
Calculus of human nature
Pathetic to my dismay... 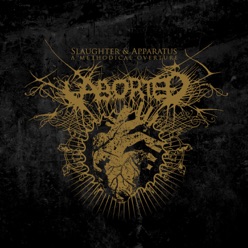