In Kaupanger the District Governors lived
Ivar Dape and another deceiver
Sworn to Sverre Sigurdsson
They collected taxes, excises and more fees.

The people of Sogndal only supported Magnus
Erlingsson, not the deceiver King Sverre.
The King was afraid to lose Sogn to Magnus the true kingsson.

Close to Christmas 1183
The Governor-filth demanded extra taxes to
Christmas celebrations for themselves and some others.
The bloodbath was about to happen.

These brave men from Sogndal,
Eide and Kaupanger went against the Governor scum on
Christmas eve angry and full of hate.

The wiseapple Ivar Dape asked for peace
Arntor and his men proclaimed war.
But after the axe his head chopped off,
there wasnt much peace left in this chest.

Past midnight the killing of thieves, crocks,
servants and Ivar Dape was done.
The celebration of Christmas in Sogndal began. 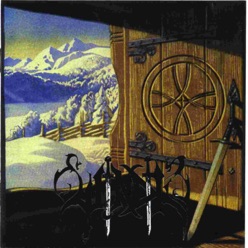