"One, two, three, four, five"
Oh-six through oh-eight, this is oh-nine live
And for the new year I pack a chrome fo'-five
And keep it straight raw like Shady fo'-five
It's I, youngest in charge, a.k.a. so fly
Act up, I'm your neck like a fuckin' bowtie
Back up, show respect to the newest multi-million sold,
And that's only in the N.Y., oh!
Get low when that kickback blow
I put a X on you squares, call it tic-tac-toe
{click clack blow} Put a lil' tag on his toe
I call it yeast infection faggot how I get that dough
So who want beef, and I'm a shoot it 'til my shooter come through
Hop out the Cougar put a hole in your medullah
It's mo' back at it I'm stoned like crack addicts
Hocus pocus sayonara I'm gone, black magic

That EPMD we a hip-hop phenom'
This style I birthed it, I am the mom
The illest (Slow Flow) and the one-two
(Without D.M.C. I'm who they Run to)
Who they come to, to get their swag
(I've been that little boy with the duffel bag)
Ain't anything changed, keep cash bags with me
(I'm a threat, so I keep trash bags with me)
Okay! Dem lay, and if they dumpin'
Double pumpin' shotgun action, who's askin?
You! (Can't be for real)
(You eatin', but you ain't finish your meal)
Uhh, I'm the blueprint for those who can't lose
(I wrote them checks so I paid them dues)
Yeah Sermon, who walked in my shoes?
You better be Bigfoot (if not stay put)

So I'm the future of this music, bet your life on that
Since construction paper and Crayolas I've been writin' raps
So don't confuse me with these bamas that, ain't got no talent
And just all of a sudden up and decide to rap
Ain't no disguisin' that bullshit, they ride to that bullshit
Who bought 'em that bullshit? Your mom and them?
She probably mad, 'bout to whup your ass for not again
But don't feel bad, you just tryin' to win
Talkin' 'bout designers and your diamonds what you drivin' in

And you ain't even behind the wheel, go to the passenger side of it
Tell me, why is that niggaz do that? That nigga ain't do that
He lyin', he ain't never lived through that
Even people that know you hear you and be like "Who that?"
That nigga ain't do that (uh-uh, I don't believe him)
I been knew that, been seen through that
Hear you yappin' 'bout some weight you never sold
People you ain't never shoot at
Take it down, let's see whatever fairy tales you bring back
(You do got a good imagination though, I can tell you that)
This force is all boss, to fakers of all fakers
Just face it, you all talk and it's phony baby 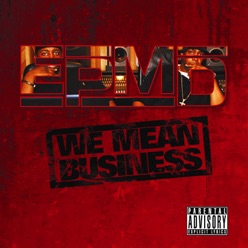 We Mean Business
2013
See all discs