1) The Shimmer of Optimism's Mirage

3) Furious Activity For No Discernible Reason

When are you you?
You seem so far away
From the man who climbed the mountain on some halcyonic day
Supervisor's closing in on methods you prefer
Waving your appraisal forms like weapons, built for her

Do you meet approval from the people at the top?
Could you stand for them in the shop?
Are you a good team player in a side that want your art
To mould into their die casts? The truth is
They can't take it with them, they can try, but they'll fail

6) Steve Wright In The Afternoon

Steve Wright in the Afternoon, friendly DJ
A bit of humour, bit of music
Helps pass the time
News bulletin at four o' clock, so you know you're on the homestretch
But the minutes drag on your analogue watch

Steve's like a car you follow in the dark - he's your friend
We've got some time that we don't wanna spend with you
We're only here 'cos there's nothing else we can do
And Steve knows, - 'cause he's under no illusions
So he gives us a factoid or something to make the time go by
It ain't gonna be “Yours Is No Disgrace” (But he has a good try)

All the factories and offices all playing the same tune
Singing “Happy Birthday” to a man in Bodmin who's getting married soon
And if you're on the M25 you'd better run for your life
Because the Ant Hill'l be emptying soon
And all the flyovers and tunnels that circle round the church
To the soundtrack of an innocuous tune
Hey Steve! Are you just like me?
Waiting for the wall clock to set you free?

We've got some time that we don't wanna spend with you
We're only here 'cos there's nothing else we can do
But Steve's gone! He's already in the car park
Left another Cheerful Charlie in the hotseat to make the time go by
Listen while you drive

All the traffic news and the Tuesday blues
Join the drizzle and the rain
A million ants by the Dartford Tunnel wait to pay 2 pounds again
And they'll take away the car and house and stick you on the streets
Unless you do this journey every day
And the landlord's on your tail again, the Queen Ant needs her lunch
And there's gas and electricity to pay

Hey Steve! - Can I be like you?
Everything seems laid back on Radio Two
We've got some time that we don't wanna spend with you
We're only here 'cos there's nothing else we can do

I shear the bolt, he turns the screw
We all have our part, and there's one for you
And we're all alone, yet surrounded by peers
Try to make our mark as we work off the years... crawling, marching

8) Coming Up On The Hour 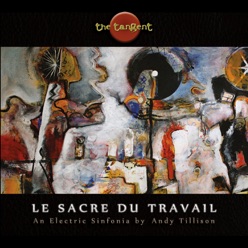 The Tangent songs in December