Dare I deprive the reader of that first glimpse of Ambergris?
That first teasing glimpse during the
carriage ride from the docks?
That glimpse, and then the sprawl of Albumuth Boulevard,
half staid brick, half lacquered timber?
The dirt of it, the stench of it, half perfume, half ribald rot.
And another smell underneath it-(Coughs)-the tantalizing scent of fungi,
of fruiting bodies, of spores entangled with dust and air,
spiraling down like snow. (Violently coughs)
The cries of the vendors,
the cries of the newly robbed, or the newly robed.
The first contact of shoe on street out of the
carriage-the resounding solidity of that ground,
and the humming vibration of coiled
energy beneath the pavement,
conveyed up through shoe into foot,
from foot into the rest of the body suddenly
energized and woken up.
The sudden hint of heat to the air-the possibilities!
(Maniacal laughter)-and,
peeking out from the storm drains,
from the alleyways, the enticing,
lingering darkness that spoke of tunnels
and sudden exploration.
One cannot mention our move to Ambergris
without setting that scene, surely!
That boulevard became our touchstone,
in those early years, as it had to countless people before us.
It was how you traveled into Ambergris,
and it was how you carried them out
when you were finally left.

But as fascinated as Duncan would become with Ambergris,
he went elsewhere for his education.
At our mother's insistence,
in one of her few direct acts of parenting.
Duncan received his advanced degrees
in history from the Institute of Religiosity
in Morrow {or as the historians call it,
"that other city by the River Moth,"
a good hundred miles from Ambergris}
Hooo-ahhh! Yeah! Hoo-hoo-hooaaahhhh! Yeah! No, no, no, no, no....

Duncan devoted one dark,
ripe little corner to the "changing facade of Ambergris,"
as he called it. At first, this corner consisted
only of overlapping street plans,
as if he were building an image
of the city from its bones.
The stark white paper,
the midnight black veins of ink,
contrasted sharply with everything else in his rooms.
(Maniacal laughter) No, no, no, no, no... 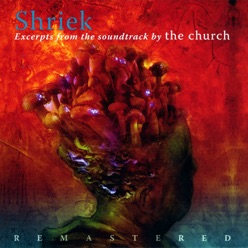 Shriek (Excerpts from the Soundtrack)
2009
See all discs

The Church songs in December