An Empire Razed (A Kingdom Raised)

Those myriads who raised the pyramids,
that bottom that built for the top.
And they scaled those walls to see
the blessings
I said I've got.
Then I realized my deserts only better
if the good Lord deems the necessary plight of weather.
Oh how I hoped,
o how I'd gloat,
for a wicked escape from their homes as if I had it all,
as if I wasn't still drinking from that moat.
They fixed their eyes on a god stuck in the sky.
They kept their gaze on the rooftops, not the death inside.
They fixed their eyes on a god stuck in the sky…
some place for escape,
but eternity began before our time.
And there stood truth in the darkest night,
maybe the tyrants had fallen by the wayside.
And I watched from my mountain what I thought was a holy light.
They'd brought down the priests,
they'd brought down the priests and their religion with fire.
They burnt the churches where they'd worshipped...
not a single heart contrite.
And I burnt a cigarette,
drank the kings whiskey to help clear my mind.
They set it ablaze like desert brush on a summer's day.
We could have dirtied our hands and washed the lies away.
For truth exists, and oh how it exists…
But like my mother said,
"We'll probably have it all wrong in the end."
And I fixed my eyes on the sun stuck in the sky.
I kept my eyes on the source of that light.
Oh I... I fixed my eyes.
I fixed my eyes.

An Empire Razed (A Kingdom Raised) de So Long Forgotten 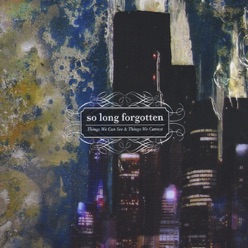 So Long Forgotten songs in March