Now in my mothafuckin heart I got a lot of real love
But my brain's unstable
I just wanna wish death onto major labels
I just wanna wish death onto basic cable
And the fuckin' radio station to fake to play true shit
Real music... Kill the industry bodyybag it with blue lips
Ohh shit, drop the casket in tulips
2 Clips pop attacking you move quick! Woo!
Gotta warm it up I'm guessing
Cuz I'm flowing like I'm stepping with an ak47
Semi-automatic, Mac-11 weapon and eleven methods
Of making medicine out of madness in a session
Man my vocal chords are bleeding
Cuz I'm rapping with aggressiveness
It doesn't matter if I'm hoarse (horse)
I'm practically a pegasus
You're looking at a lunatic, I'm bigger and sicker
And every time I fucking pick up the liquor
I'm ripping it quicker
And I don't give a fuck about the gimmick I'm sick of it
This is the end of it, this isn't intimate
I don't wanna underestimate the fact
That I got endless influence
I could probably make a couple children end up as idiots
All I gotta do is settle and argument with the devil
My heart isn't made of metal
But part of me's just an artist
And part of me is a martyr of marketing
At a level that's arguably incredible
Pardon the schizophrenia!
Demons are always talking to me
And I fuck em often
My feet are up in a coffin
Not breathing not fuckin' talking
I need you, I'm fucking stalking you
Searching until I find you
I'm lurking I'm right behind you
I'll murder you: On the bible
I admit that I'm a little loony
You could prolly stick me in the psycho
Ward
I'm thinking of the planet earth and flying towards
Heaven... Walk in, holding two guns up
Since she's been gone I ain't ever felt the sun up

Sin in my cinema
Get to sippin' with a spliff
I got a soul it be sinister
With the sick, a lot of shit
I'm bout to give you the killer drama like bryan depalma
Who be the angel that got me flying? My mama
Devil don't wanna see me tight as string in a piano
My levels equivalent to flight when you see animals
Over the aircraft and into the universe
A lunar curse, when I sit down I'm ready to groom a verse
In the middle of a murder I kill up everything
I'm taking the title from the idol
For the meddling with the metal head
Nigga better go hit the pedal
Cuz an angel don't ever give a damn what a devil said
Anybody wanna battle I'm a decapitate
I can do it the fluid will kill em off when I activate
I'm a laugh a lot of em little lames when I lacerate
Murder masses with my mic and my masturbate
Leave y'all, with the tongue and these jaws
I'm incredible haters don't wanna ever recall
That I come to beast all
They free fall, cuz we raw
Nina be heavy you be the leaf on the seesaw
So competitive they gimme the bucks
They don't wanna step into me cuz I'm rippin em up
And all the people that wanna get it
I'm ready so come on with it
But if you a critic
We never giving a fuck, we living it up

I'm in a mess I lost maudie
I don't want anybody to call me
I'm really vexed and not jolly
The shit I been thinking is ungodly
Will I reign, will I stress?
Either way I'm gonna aim at your chest
I ain't tripping of the angel of death
Cuz maudie sue yates is the angel of tech
Cha! 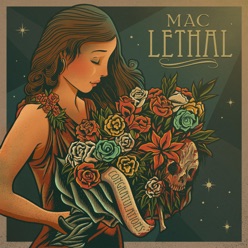 Mac Lethal songs in May