Back In The Lab

Back to the lab, rap in the bag
Roll me a blunt, pass me a pad, the dude's goin in
I mastered the craft, laugh at the past
Fo' in the trunk, mashin the gas, you're too slow to win
Who's dope as him, latent'll lie
So high, you'd swear he had a license to fly
Look up, you might even see him right in the sky
So high, I should give skydivin a try - know why?
I'm gettin loot and bread, got these lil' duellers fed
Cause this rap shit to me is easier than Superhead
When she move the bed, prick I'm on the grind
Lyrically inclined, every sentence get rewind
The kid is in his prime, a monster on the track
Tauntin all these cats, where's the competition at?
JR spittin crack, The Carter couldn't match
Sharper than a tack hold Harlem on his back
It's a fact you couldn't yell our shit is whack
I helped build the team that put Harlem on the map (DipSet)
Come holla at a mack, who got this in a wrap
So next album'll have your girl polishin his - plaque
Uhh, then it's right to the streets
Light on my feet, goonies that'll light you for cheap
Wipe you deceased, knife you to sleep, for some sneaks
Even though my pockets deep as Barry White on the beat
Sheesh, I'm a beast with a flow like a jab
Plus the game's so weak that the dough's up for grabs
So I'm low on the ave, with the toast on my abs
Waitin for this bitch so I can put the hoe in the bag
It's sad, but nigga I'm a pro with the pad
Put the mic down, you're washed up and old as my dad
Get a load of his swag, you couldn't fly without a pilot
You're bummed out and better off findin you a stylist
Uhh, the future is me, and soon as can be
Ruger to T, shoot you for free, salute to the G
Who's nothin but nicer, gun in his cypher
Bottom line, ain't nobody out as hungry as Writer, uhh

You hear that man?
Y'all can't fuck with me at all man
I got this shit on lock and key
And I think I mighta lost the key so y'all assed out man
Huh, let me get my zone on man
Let me finish smokin this purple, countin this money
And uhh, turn the music up and get in my zone man
Let's do it!

Back In The Lab de Jr Writer 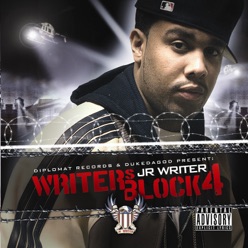