[ VERSE 1 ]
Since the day I was born I was on a mission
Never played out of position or wishin or missin
I came out kissin, was no spankin the backside
Just lots of lady nurses waitin for black eyes
I - I was talkin way before I could crawl or walk
And what the ladies heard, wasn't baby talk
I'd drop a line like a bomber would drop a bomb
Highly explosive, but notice, I was cool and calm
Ready for action, at the age of 1 the fun
Was just beginning, I was winning, the ladies would come
With arms open and hopin for a kiss and a hug
I stripped down, huh, and watched the ladies bug
I stood up for a while, then I started walkin
I heard the ladies say, "Look who's talkin"
That's right, baby, you can leave me alone
Cause if you can't please me, don't tease me, cause I'm bad to the..

[ VERSE 2 ]
As a teen I was on the scene cleaner than clean
Mean lean fighting machine with self-esteem
No dope, crack, coke, flat broke I'm not
Sell smoke, nope, nope, won't smoke the pot
Gettin high off life was more than enough
And peer pressure ain't pressure when a boy is tough
And I was tougher than tough, I'm from the darkside
And hangin out in the park and in the parkside
Play a brother in any game he wanted to play
For fun or money, for money if he wanted to pay
I wasn't diggin for niggas, so brother, dig deep
If one got over, it's over, I let the kid keep
A little change, it's strange, he want to bet it back
I took his claim to fame, he want to get it back
And when the night was over I took his girl home
I dimmed the lights and showed her that I was bad..

[ VERSE 3 ]
Now I'm in my 20s with plenty money and honey bunnies
20s and 10s, drive a Benz, you can't take nothin from me
Cause I came up on the streets, a straight up poor boy
But I beat the game, but it was war, boy
Because the streets entice you for the wrong things
I couldn't pay the price, I wrote a song theme
And from the moment I touched the microphone
It was known that I was bad to the bone
But weak rappers and a lack of promotion
Made the job hard, I had to throw some
Weak lyrics together, just to get paid
'Go See The Doctor', and I got played
The train continued to the 'Wild, Wild West'
I heard some brothers say, "He ain't the best"
Huh, but check the records that ain't well known
And look around and see all my clones

[ VERSE 4 ]
By the time I'm in my 30s my worth be - I bet I'm dirty rich
Sittin on the top of the world with about 36
Million in my pocket and rockin it from the mountain top
Livin it at ease, cool breeze, because I'm countin top
Dollar, I'm a scholar seekin knowledge, I'm a truth-seeker
The baddest brother on a microphone and two speakers
On turntables I'm able to start a movement
And when I move the crowd, the ladies move with
Fire in the eyes, the eyes never lie
So feel the fire and desire, keep your eye on the prize
Ladies, listen to the man and watch me work
Fellas, keep your cool when she goes bezerk
Cause I touch em in places that most men don't
Don't get jealous, fellas, oh, that's all she wrote
Then when the night is over you'll be alone
Cause ladies love ya when a brother is bad to the bone 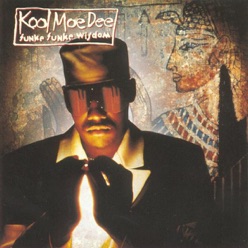