Based on a True Story

Newscaster: In the news tonight rap star Mack 10 releases his second
solo album titled "Based On A True Story," and according to reliable
sources Ha, he laughs in the face of the sophomore jinx. After the
release of Westside Connection and Mack's new record, gangster rap
seems to be at an all time high.

Verse 1
Either the thrill of victory or the agony of defeat
you either got ends or struggle to make ends meet
You can either turn square or keep the mind of a rebel
some uppity livin' good some faced with death in the ghetto
I'm a product of the streets so I vow to never slip
so I trust no one and keep a P. Coltrane on my hip
I always paid attention while my O.G's was teachin'
Rule number one if it's on blast the first nigga reachin'
either death or the pen' shit I had to do better
It was a must I moved on and now I'm all about cheddar
a young entrepreneur I rather slang than bang
now girls be like you go Mack 10 baby do yo thang
So I continue to get down and I keep writin' rhymes
and I parlay every dollar to flip at least a hundred times
So keep your game tight and it's all fame and glory
and everything I recite's Based On A True Story

Too $hort talking: Say Mack baby, it's yo pa'tna $hort dog man.
You know I got yo back boy. You know a nigga like me I just left
the Ferrarri dealer man. I ain't go lie I know you ridin' rims.
But the problem is, it's a lot of mothafuckas out there that think we
rappers man. That think we just sit at home and make this up at
our momma's house. I hate to tell y'all man some of us are real playas
real ballers biitch.

Based on a True Story de Mack 10 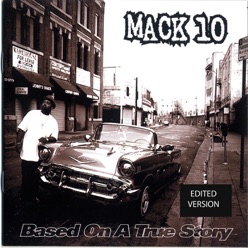 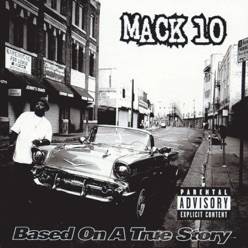 Based On a True Story
1997
See all discs