Chorus:
People came ??
Encore, encore
People came in by the load
Ooh, love is strong
(KMG)
Yeah why'all, I felt the need, I had to let ya all know
How Above The Law flow, we keep it funky gangster ratio
Yeah, we taking our time, ''cause patience is a virtue
Plus we ain't in a hurry to motherfuckin' hurtcha,P
We checked in date of 1989
Intertwined with some chips to sign
On the little dotted line
It was lovely and the DeNiro was clean
Different from the crack money, but green was green
Fresh on the scene, niggas didn't know the time, we enterprising
But never realising how the criming and the rhyming would twist
And make a hell of a mix
Had the neighbourhood fiending like some junkies before a fix
Halfa Cali came to get with the source
They did after we down, players could have they own choice
Either rap singing, or even street singing,
It didn't make a difference, long as the funk you're bringing
Everybody's down with the Pimp Clinic
But all they wanted was a piece, piece of the streets
And we be all up in that ass with the quickness,
The thickness, yeah
Funkin the set from here to the east
This is a player thing, this ain't no fucking bullshit
Because we pull shit
My name is KMG, I'm from the Clinic and the Park
You either get glocked in the dark, or get sparked
Yeah, I had to change my wives, change my ways
Straight cut the strays and live for better days
Low ride, slide
Through the street, a real nigga ready to eat
Rolling tough with the glock on my seat
(Cold 187)
Yeah, now I done travelled round the world and said a million rhymes
Like with NWA, back in 89
I put the see in the controversy in the industry
Like Eazy E and Ice T, yo
I did thousands of shows, I dissed many faces
I deal with new jacks on a waayy out basis
I put it down with the true crew
We leaving player haters mesmerised when we trip through
(KMG: "How many suckas you know?")
Well, I know a whole truck full,
I'm trying to stay two steps ahead of any bullshit they tryin to pull
Motherfuckers claim they hard,
And put in half the work, and did half the dirt
Ain't even from the dirt
What I would do if I was you is shut your fuckin' mouth
''cause we be moving keys while you're playin house
I'm the original rap murderer
See, I can beat your ass, rock the mic
Or fuck your girl on a good night
''cause From Pomona to SC
I represent the real niggas, daddy, who ride with me
Yo, on the real
I got skills like a fifth degree black belt
Plus I'm ten times more explicit than the ??
Niggas making schemes and gimmicks to sell LP's
Instead of being real and stacking G's
Yo, uh, I'm like a fool at a house party,
If I'm heated, I fuck it up for e'rybody
(KMG: "What's your name, nigga?")
Oh you don't know, yo,
It's Mr.One Eighty Seven with my dick all in ya ho
Yeah, if she want to ????
She won't know ???

Encore de Above the law 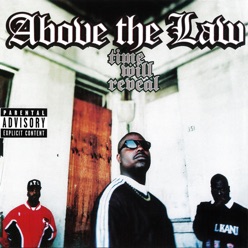 Time Will Reveal
1996
See all discs