In a Pontiac 600 on a Florida side street.
There's no place like the Midwest, except the Southeast. When the clouds hang low on a vacant beach and the roads stretch on, endlessly.
And the great facade of the Holiday Inn is windowless at 3am,
we're on camera, we're careless for once and we'll be damned if we're not having fun, we're on radar.
We're not very far from an ocean breeze or a field of dreams, and no one is getting any sleep.

Just as the bluffs are hills the gulf's a sea, the sky's the limit we meet.
Horizons on the palms and leaves, the waves reflect the blues and greens..
Sink or swim, drive or die, find a coast, stay alive. A Northern source will feed us now,
but we'll all end up at the river's mouth.

You know what they say about passing ships?
They're old ladies, in leopard print.
Who've lived their lives, with telescopes.
Who've made mistakes, but are now too old. 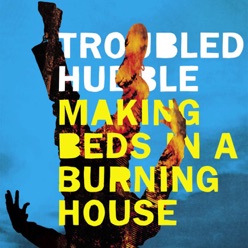 Making Beds in a Burning House
2015
See all discs